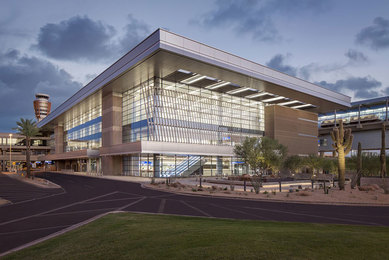 The first of a three-part phased modernization of Terminal 3 at Phoenix Sky Harbor International Airport today opened its doors to the public.

“We orchestrated the design team to create an unforgettable experience for passengers and visitors alike – an experience that only Arizona could offer,” said Steve Rao, AIA, LEED AP, president of DWL Architects + Planners, Inc., the project’s prime architect. The design-build team is comprised of DWL Architects + Planners, SmithGroup and Corgan, along with contractor joint-venture HuntAustin.

With the modernization project, Arizona’s main transportation hub, Phoenix Sky Harbor International Airport, will become the crown jewel among the Sonoran landscape. Unlike many airports, Phoenix Sky Harbor is uniquely located in the bustling City of Phoenix. It serves more than 40 million passengers every year, and has become a destination for travelers across the world. In November 2016, Phoenix Sky Harbor was ranked #1 in the U.S. by travel website ThePointsGuy.com based on on-time flights, amenities and more.

The City of Phoenix’s Capital Improvement Plan for 2015-2020 was the vision to bring Phoenix Sky Harbor International Airport and surrounding areas into a unified campus. It determined a half billion-dollar modernization to Terminal 3 was needed to accommodate increased passenger flow while also creating a world-class travel experience.

The project has three components comprised of renovating the processor building and north concourse, as well as demolishing and building a new south concourse. This, in turn, supports the vision of a multi-modal campus incorporating the PHX Sky Train® and the City’s Light Rail System. The project is being completed in phases to minimize impact to travelers.

The biggest challenge during the initial phase of the modernization program was creating a new and open experience from the original closed-in and internally oriented concrete building. To accommodate the world-class views and provide an open, daylight filled space, the design team manipulated the existing structure by removing large sections of the mezzanine and the pre-cast façade.

“With the design, we took advantage of the Phoenix location and made connections to the city and surrounding mountains with views that are truly outstanding,” said Mark Roddy, FAIA, LEED AP BD+C, design director, SmithGroup. “We took what was a very inwardly focused building and made it externally focused, celebrating the beautiful Sonoran Desert landscape.”

The arrival experience on the north curb immerses visitors into the Sonoran desert flora with unique vegetation forms. The glass facade on the west encapsulates a cutting-edge, industry-leading facility. The large overhanging pavilion roof, representative of a porch, and west shading is carefully calibrated to reduce glare and heat gain, while maintaining views of the city and landscape.

The recomposure atrium provides a unique place for passengers to gather and explore the views of the airfield and the Phoenix Mountains Preserve after passing through security.

The DWL Architects | SmithGroup | Corgan team aimed to revive the romantic feeling of aviation travel and designed a grand gathering space reminiscent of great transportation halls of the past. Located between the north and south concourses, the Great Hall transforms the current passenger hall with higher volumes, views, and natural light, while providing a centralized passenger amenities area.

A Museum Gallery has also been added to the terminal. In future phases of the project, new shops and restaurants will open, giving travelers a chance to continue their Arizona experience even after passing through the security checkpoint.

At the fourth and top level, skylights offer clear views of the sky and the combination of the glass angle and the gradient opacity of the glass eliminate glare. The result is a space naturally illuminated and connected to the environment. The ceiling, with its shifting, undulating, illuminated surfaces provides a sense of lift punctuated by a series of skylights.

The airport terminal is a bustling public place where people from all over the world move through. Given the need to create a space to accommodate the vast array of diverse commuters, careful consideration was given to the use of materials to help guide an efficient passenger flow. Wood panels, acoustic metal ceiling panels and the use of six shades of terrazzo flooring provide a natural flow with intuitive wayfinding. Atriums at both the departures and arrivals areas provide transparency, so one can see where they are headed whether through the facility or outdoors.

Following the completion of the initial stage will be Phase 2 of the modernization program.  Targeted for completion in late 2018/early 2019, it will create a new 15-gate south concourse. New amenities such as food and retail concessions will be added. Finally, Phase 3, to be completed in 2020, will involve the complete remodel of the north concourse focusing on an open passenger experience with shared holdrooms and concessions enhancements.

DWL Architects, Arizona’s premier aviation architect, has worked at Phoenix Sky Harbor International Airport (PHX) for more than 50 years as a committed partner and trusted advisor, completing more than 200 projects to-date. Playing a leading role in the development of the airport, DWL Architects has provided architectural services that have grown the facility from one terminal to three. The core team has worked at the airport on terminal expansions, renovations, new concourses, concessions, checkpoints and more. Because of this expertise and unparalleled understanding of PHX culture, DWL Architects serves as the prime architect providing local and jurisdictional expertise, aviation and operational knowledge, as well as effective guidance navigating client relationships. In addition to being the team lead, DWL Architects’ specific architectural role includes the core building design focusing on the overall terminal planning.

SmithGroup is recognized as one of the nation’s top architecture and engineering firms and the recipient of more than 400 design awards just in the past five years. With a long-time presence in Arizona that dates back to 1978 upon the opening of its Phoenix office, SmithGroup has become well known for its design excellence in the community; among its most lauded designs are Chandler City Hall, GateWay Community College’s new Integrated Education Building, and the first net-zero energy project in Arizona: the DPR Construction regional headquarters building. Due to its design expertise and local knowledge, SmithGroup serves as design lead for the overall building envelope as well as the surrounding landscape. The firm also is also leading lighting design to create a unique experience in and outside the facility, and is responsible for maximizing the performance of the building through sustainable design measures.

Corgan is a 78-year-old architectural firm with nearly 200 professionals dedicated exclusively to the planning and design of aviation facilities. Corgan has built lasting relationships with aviation clients at more than 150 airports across the globe. These partnerships, in conjunction with the ability to deliver complex terminal programs, are a direct contribution to the firm’s recognition as Building Design + Construction magazine’s 2016 #1 Airport Terminal Architecture Firm. Leveraging its extensive research in wayfinding and international aviation design expertise, Corgan’s role in the PHX Terminal 3 Modernization project focuses on programming and leading the interior design effort to elevate the passenger experience and enhance interior circulation.

HuntAustin, a Joint Venture, is a 50-50 partnership between Hunt Construction Group and Austin Commercial. HuntAustin has delivered more than 36 million square feet at 21 of the nation’s busiest airports, including: Atlanta, Dallas/Fort Worth, Denver, Detroit, Indianapolis, Los Angeles, Miami, Nashville, Phoenix, and Sacramento. Additionally, the joint venture has had a major presence in Phoenix for more than a decade with multiple successful projects at PHX, including the consolidated rental car facility, security checkpoints, airport-wide signage, and food and beverage.