Eighteen months is a long time in the technology world but often feels like nothing in the A/E/C industry, where some projects can take years to cycle from conceptual design through construction and then occupancy. However, only eighteen months ago, SmithGroup’s Washington, DC office began experimenting with a Dev Kit of the Oculus Rift. The experience ranged from struggling to get the system up-and-running and having difficulty finding software that would support A/E needs, to skilled competence and, ultimately, mastery of the tools. This is what we’ve learned on our journey and why SmithGroup has made the investment in virtual reality (VR) and augmented reality (AR) technologies.

Personally, as an architect and a technologist, VR poses an exciting opportunity. For almost 20 years, our design tools have transitioned from simplistic digital lines to a more complex modeling processes focused on intelligent objects. Walls behaved like walls and created boundaries, while windows formed and framed views in our designs. The relationships of these intelligent elements have allowed professionals in design firms to better analyze, develop and tweak our designs before the reality of the built version. This was BIM’s (Building Information Model) initial promise to architects and other design groups. But a frequent complaint as BIM evolved was that much of the time and energy spent on the model provided little or no tangible benefits, particularly with regard to standard two-dimensional deliverables.

However, virtual reality and augmented reality are tools that clearly have the potential to expand the return on investment that firms like SmithGroup have devoted to their building models.

The pieces are now in place to do more with BIM, and VR is poised to take advantage of it. As a tool, virtual reality just makes sense. If we’ve already built a model, why can’t we better experience the design? Yes, we are able to create renderings from models, but their static and inherent two-dimensional presentation, whether displayed on paper or a computer screen, leaves many unsure of how a space feels. Virtual reality allows us to expand the experience of the design into an immersive rendering.

We should note that VR is not new. While attending Virginia Tech in the late nineties I can clearly remember their CAVE (Computer Augmented Virtual Environment) program – which I recall as big, remote, and exclusive. But times have changed and those barriers – real or perceived – have been knocked down.

Back in the 1990s and early 2000s when VR was in its infancy, almost all architecture created by computer appeared in simple two-dimensional lines and modeling was an additional step or deliverable. Now digital modeling is intrinsic to the process (as opposed to being a secondary task) and with BIM, we have multiple models associated with virtually every SmithGroup project.

VR software options are plentiful and continually developing. However, it is useful to think of VR software in two buckets – push button and post processed. Push button solutions will allow you to review models immediately and with zero post-production effort by leveraging the quality of the work put into the model up front. The trade-off is a reduction in rendering quality, as the hardware must render the model on the fly. In the push button world, we have had great success with Enscape and Prospect VR. We like Enscape because it can pull directly from Revit or SketchUp and delivers higher quality deliverables than its competitors. As an added bonus, Enscape is an add-in to Revit/SketchUp. As a result, it can provide enhanced functionality to the design software and allows users to experience live changes to a design model while immersed in a virtual environment. Alternatively, if you are looking for support for additional model formats with a consistent interface (Revit, SketchUp, Rhino, Grasshopper), IrisVR’s Prospect may be the software for you. This platform provides users the ability to hide and turn off layers of the model with no support outside of the virtual environment. The amazing thing about both of these tools is that they can often place users in a virtual environment in less time than it takes to open the model.

Post processed solutions place users on the other end of the VR spectrum. This tool should be considered by users that are willing to spend time – and it can be substantial – to add effects such as back lighting, reflections, enhanced materiality and more. These high-quality, photo realistic virtual results are accomplished via gaming engines such as Unreal, Unity or Stingray, which are used to create some of the most realistic video games on the market. The deliverables created from post-processed solutions can be created in-house or outsourced to select third party rendering firms.

Today, users can purchase VR headsets over-the-counter and select from an array of competing products. Being able to walk into Best Buy and pick up a system like the Oculus Rift or HTC Vive is possible and may be the most important change that is driving adoption. You no longer need to “know a guy” who can get you access to the tools. Now, everything you need can be packaged and delivered to your door.

We’ve got the power

Computing power has also continued to expand exponentially. For example, at SmithGroup our typical workstations and laptops have 64GB of RAM. But we are not far removed from a time when 4GB maximums and the dreaded 3GB switch was a way of life. This increased power has opened the door to enable the transfer of working models directly into a virtual environment. Graphics cards have also drastically improved; next generation cards from nVidia’s 1000 series and ATI’s Radeons have made it feasible to create the graphics necessary for a convincing virtual reality experience.

Video gaming engines have been used to showcase A/E designs for years. However, in the past it required days of streamlining and hacks to simplify complex architectural and engineering models. These challenges were compounded by the fact that graphics cards of the past were not able to handle the increased complexity of models exported from Revit, SketchUp or Rhino, which in many cases could require up to seven times the processing power. That processing gap has started to close with the production of current generation graphics cards. Even more exciting, future advancements with dual graphics card set-ups will likely continue to increase graphical power to VR headsets and take the VR experience to another level altogether.

VR hardware controls initially required using a game pad or keyboard arrows, which drastically affected who would feel comfortable moving in a virtual world. Additionally, the lack of elements that ground people to reality can cause people to experience dizziness and nausea. As such, both Oculus and Vive have developed controllers that appear in the virtual environment to help ground the user’s senses and, in most situations, remove potential negative side effects. Still, each software/hardware combination has a unique feel. Do you want to walk? For tools like HTC Vive, users are given a limited walking area to work with, while Microsoft’s HoloLens isn’t tethered to anything and grants users full range of motion. Want a mobile solution? Maybe the Oculus Rift is the best solution for you. At SmithGroup, we’ve adopted the Vive for its enhanced movement capabilities and have installed hardware in dedicated VR spaces across all of the firm’s domestic offices. 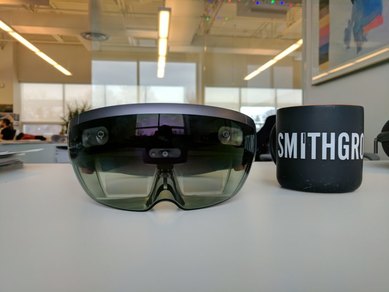 Where should we be?

It is important to understand that with many of the VR tools available at this time users must accept trade-offs between quality and speed. Things we tested at SmithGroup a year ago will likely have different behaviors and results today. Features have changed, interoperability has improved and new tools arrive to the marketplace daily. Is it a gimmick? No. This is not 3D TV. We hope that you have come to realize that there is a wide movement behind VR and the benefits of experiencing a design in a virtual space are enormous to both clients and designers. Perhaps you have also come to see the expanded benefits that BIM VR can provide. Here at SmithGroup we see the benefits of both solutions. Maybe the next step in the VR movement will galvanize a new series of design deliverables. Maybe schematic submissions in the future will be a VR walk through…Who knows what the future holds?