Driverless Cars, Technological Change and the Impact on Cities 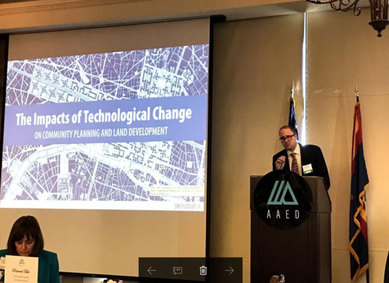 I recently had the great opportunity to speak at the Arizona Association for Economic Development in Phoenix. The presentation and panel discussion centered around driverless cars and how the technology is positioned to change cities in the future. Co-presenters included Eric Anderson, Transportation Director of the Maricopa Association of Governments (MAG), and Phil Rayer, General Manager of Local Motors.

Arizona is particularly interested in capturing the enormous benefits of this emerging technology; state and local governments are thinking ahead. The technology offers tremendous promise, with the potential to:

Arizona’s state government is enticing autonomous vehicles in part by limiting regulations on companies developing the technology. Since 2015 the Arizona Department of Transportation, Department of Public Safety, and other agencies have been examining ways to advance the testing of self-driving vehicles on public roads. As of 2017, Arizona is one of around 32 states that have introduced legislation related to autonomous vehicles.

But a blank-slate regulatory environment for companies doesn’t mean that local and state governments aren’t trying to plan ahead for the technology. The Maricopa Association of Governments is examining a variety of scenarios that might result from the technology’s effect on all aspects of modern life, from economics and the law to travel behavior and land use. The adoption rate of self-driving cars won’t go from 0% to 100% in a couple of years, but will occur over the course of several years, with varying levels of autonomy in the vehicles as the technology improves. This means that planning should take into account a range of changes over time.

If 100% of vehicles on the road are autonomous, equipped with sensors, and communicate their positions with each other, Eric Anderson of MAG says it could increase highway capacity by more than 5 times. This could result in increased traffic through a phenomenon called “induced demand,” which we normally see when we add lanes to highways. In this scenario, existing infrastructure would become more crowded and dense but also safer and more efficient.

While state and local governments are exploring ways to plan ahead for the coming driverless era, private enterprise is examining ways to use the technology to provide innovative transportation solutions. Uber is setting its sights on testing the technology in Arizona, while Waymo (Google’s self-driving car division) is already testing vehicles in the state. Local Motors in Phoenix is developing Olli, the self-driving electric bus of the future. Olli can connect into a city’s existing transit infrastructure and gets its smarts through Watson, IBM’s cognitive computing system. 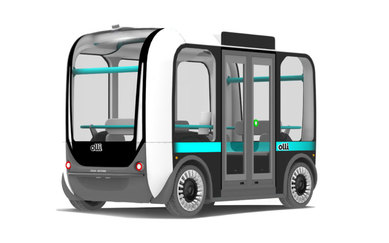 Phil Rayer of Local Motors spoke about how the technology behind autonomous vehicles will provide new efficiencies to our transportation system. There’s a lot of inefficiency in the system today—with gas-powered vehicles sitting unused 95 percent of the time, as noted in an April 2017 issue of The Economistcalled “Aparkalypse Now.” Continued advances in battery technology, sensors, and artificial intelligence will help create a more efficient system that provides a variety of autonomous mobility options such as driverless busses or taxis. Though the future might bring more demand for trips, a more efficient transportation system might be able to keep up with increased demand.

The technologies behind driverless cars are exciting and will have a tremendous impact on our cities and communities in the future by helping to make our transportation system safer and smarter. During the Phoenix panel, I spoke about technology’s lengthy history of transforming the physical, economic, and social structures of cities. Future advances in technology, such as driverless cars, will likewise change how we live and work. Robotics, driverless cars, and drones rely on high-tech mechanics for movement, while their ability to perceive and react to the environment is driven by an array of sensors and cognitive computing technologies. In driverless cars we are combining the automation of mechanized labor with the automation of cognitive processes—producing a technology with truly transformative potential.

It’s important to understand that driverless cars are not the only shaper of future cities; rather, they are a “species” of technological innovation that has been amplifying physical labor for centuries and has only recently begun to dramatically augment human intelligence. In an article recently published in the Journal of Urban Regeneration and Renewal I write about how, just as the mechanization of labor transformed cities in the 20th century, technologies powered by accelerating advances in software and artificial intelligence programs will also change what it means to be a city in the 21st century.

To remain relevant and competitive in the years ahead, cities must do more than adapt to new technologies. They must capitalize on what they do best: being places that celebrate human interaction in the physical world. This does not mean that cities should avoid technology; rather they should embrace it in ways that benefit individuals and their communities.

Developers like CapitalLand, one of Asia’s largest real estate developers, are picking up on the idea that cities shouldn’t be a showcase for a technological arms race, but rather places that “improve the lives of residents and . . . build the character of a community,” as Lim Ming Yan writes on McKinsey & Company’s website. Here in the United States, we are making progress by reconstituting transportation infrastructure for community use through projects like New York City’s reclamation of right-of-way into pedestrian plazas, and Ithaca, NY’s modernization of the Ithaca Commons.