SmithGroup’s Mark Wagstaff is a leading expert in Great Lakes coastal resilience. He is currently working with the City of Chicago and Chicago Park District, the City of Evanston, and Northwestern University on major risk assessments and management plans for their struggling Lake Michigan shorelines. At the beginning of 2020 he published a two-part series in Marina Dock Age magazine exploring the issue of unprecedented water level change on the Great Lakes and how the marina industry is adapting. Parts of this piece have been excerpted from those two longer articles: Lake-Level Change on the Great Lakes Part One: Forecasting New Highs and Lows and Lake Level Change on the Great Lakes Part Two: Managing Uncertainty Through Adaptive Decision-Making.

The United Nation’s Intergovernmental Panel on Climate Change (IPCC) most recent report states that “Global mean sea level is rising (virtually certain) and accelerating (high confidence).” While this will play out in different ways since “sea level does not and will not rise uniformly,” the main question facing most of the planet’s oceanfront communities is generally how much and how fast sea levels will rise. 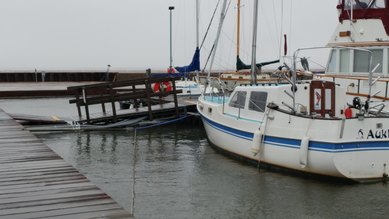 In the Great Lakes, where a large proportion of the U.S. recreational boating market is concentrated, matters are altogether less clear. Although Great Lakes water levels have a long history of fluctuating within a range of relatively consistent lows and highs, the speed and extremity of that cycle appear to be changing. The best available scientific data point toward increased variability, with swings between higher highs and lower lows. Empirically this has been borne out in Lakes Michigan and Huron by the recent swing from record low levels in 2012-13 to record high levels in 2020.  Similar patterns have been observed across the other lakes.

Whether on the Great Lakes or around the ocean coasts, marina operators are going to need to change their planning processes to account for a future that is distinctly different than the past. For municipally-owned facilities, there will be competition for planning resources and funds – competing needs in the here and now as well as future needs for investment in other infrastructure, which all too often will be subject to climate-change impacts. For private operators, there will be difficult decisions about the timing of future investments and how to pay for them.

Much of the revenue needed to pay for the industry’s response to changing water levels will come from boat owners who don’t necessarily operate on a 30-year lifecycle model. Instead they are making decisions based on their comfort level with current fees and proposed hikes. There is a risk that future-minded marinas that invest in a resilient future could lose out in the short-term if those paying the dues are not informed of the reasons why increased investment is required. Furthermore, in many instances, marinas are themselves part of a larger network of marine and land-based infrastructure with local, state and federal interests intermingled.

Introducing uncertainty into any management operation or planning effort can be uncomfortable. By necessity, the recreational boating community is well-versed in checking the weather forecasts, anticipating turbulent conditions, and preparing appropriately. Decision makers, whether they are municipal leaders, marina operators, or individual boaters, can no longer rely on hindcasting to predict the future – or to set the operational and construction standards for their infrastructure. The first step will be moving away from a reliance on purely historic data to inform the future.

Scott Stevenson, Executive Vice President of Westrec Marinas, acknowledges that the recorded data on Great Lakes water levels from the past 100 years are still his first guide to decision-making. He is hoping to see lake levels revert towards their historical mean, but if he sees a few more years of unprecedented highs he will have to consider changing his operating philosophy. In the meantime, Stevenson, who runs the Chicago Harbor system’s marinas as a concessionaire for the Chicago Park District, is widening his options – deploying ever more creative means of adapting to the difficult conditions.

One example is the accessibility platforms his team recently installed at the harbors where water levels have repeatedly encroached over the top of the promenades leading to the slips. This simple fix allows all boaters to access the facility. It is a relatively low-cost method of improving the range of operating conditions he can provide to his customers and user groups, which include the Judd Goldman Adaptive Sailing Program.

Stevenson recognizes that his management issues are not restricted to monthly high-water levels. His facilities have experienced more extreme storms, which are resulting in more destructive wave events. He has also seen an increase in the frequency of seiches – sudden water-level fluctuations on inland lakes caused by extreme wind conditions and changes in atmospheric pressure.  An October 2019 storm on Lake Michigan produced a 2-foot seiche, which Stevenson described as “the worst I’ve seen during the boating season in 25 years on the Great Lakes.” That event flooded parking lots, promenades and access points while threatening electrical transformers.

In response, Westrec is instituting floodproofing measures. These include raising transformers, replacing the last remaining fixed docks in the system, and making further modifications such as extending the height of the mooring piles to increase the range of the floating docks. They are also modifying gangways by installing hinges to keep the access to boats horizontal when water levels are high.

Frequent communication with and education of the boating community is a key tool in Stevenson’s and Westrec’s toolbox for managing uncertain conditions. Stevenson is a passionate advocate for getting the word out, both to educate his customers and to educate the wider industry. He realizes that Chicago has made some good decisions in the past; for example, the system has replaced fixed docks with floating docks for over 4,200 slips in the past 25 years. However, persistent high-water levels pose serious operating concerns. 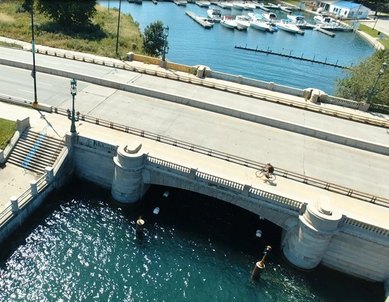 Three of the 10 harbors they manage for the Chicago Park District require boaters to enter underneath Lake Shore Drive. A few years ago, the clearance at those entrances, which serve approximately 1,000 slips, was about 15 feet. In the summer of 2020 it was down to less than 9 feet, which meant 200 slips could not be occupied by their renters. If current lake-level projections hold true, the number of boaters who will have to be temporarily housed elsewhere could double. In anticipation, Stevenson is already proactively creating opportunities for other harbors to house the displaced boaters. He is also ramping up a mailing and social media campaign to let customers know their options.

Safety is another topic that is on Stevenson’s mind more than ever. He worries about the backlog of maintenance and upkeep of the Federal breakwaters that protect several of Chicago’s harbors. He wants to see Congress step up appropriations for the needed infrastructure repair and is alerting all his customers to the new hazards that they may never have seen before in their lifetimes. He is taking steps to mark submerged (or potentially submerged) hazards within his purview. However, even though Westrec marked the deteriorated Dime Pier outside Monroe Harbor, there have still been over 20 reported collisions.

Ultimately, Stevenson is optimistic that the marina industry is becoming ever more resilient, and he is keen to play his part. “We need to share resources,” he says, “and we are happy to share with anyone who wants help figuring it out.” His outlook speaks to how managing uncertainty is not a competitive process, but a cooperative one. Sharing these emerging precedents is the most effective way to generate more and better options for adapting to uncertain – and in many cases unprecedented – operating conditions.