Amidst high lake levels and a changing climate, Great Lakes communities have faced a rising number of damaging storms and floods the last few years. 2020 has continued this alarming trend for lakeside cities and their upstream, surrounding areas. While the need for increasing our infrastructure's stormwater resilience is more apparent than ever, effective solutions are extremely hard to come by at the individual site scale.

SmithGroup’s work with Loyola University Chicago (LUC) demonstrates the results that can be achieved when green infrastructure and stormwater management systems are conceived at a larger, more integrated scale. LUC’s main academic campus and its Loyola University Medical Center (LUMC) campus are both located in highly urbanized areas of Greater Chicago, both facing the dual challenge of mitigating flooding as well as reducing polluting runoff into the watershed. These case studies highlight the benefits that could be realized by developing urban green infrastructure as a resilient system at scale – rather than through a series of separately conceived and permitted development projects.

In the early 2000s, Loyola University Chicago embarked on their REIMAGINE Campaign, an ambitious capital improvements plan to create a more attractive, cohesive identity for the University’s main campus along Lake Michigan on the north side of Chicago. The Master Plan envisioned expanded public open spaces among new academic and recreational facilities. To realize the campus's full ecological and community potential, SmithGroup worked with Loyola to develop a Stormwater Management Plan (SMP) that holistically integrated stormwater management with campus placemaking.

Green infrastructure became the key strategy, infiltrating stormwater from impervious areas that would typically discharge to public sewers. The SMP called for campus-wide use of permeable pavers, green roofs on new buildings, biofiltration swales and planters, native landscaping, infiltration vaults, and treatment of captured rainwater using an innovative gray filtration system. These strategies contributed to Loyola being named the 4th greenest campus in the U.S. by the Sierra Club in 2014. 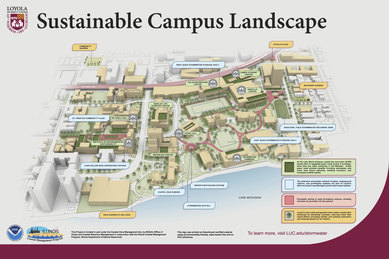 Completed in 2016, the development included new varsity and intramural athletic facilities, a new student center and dining facility, a new academic building, and signature quad spaces integrated with campus-wide stormwater infrastructure. The optimized drainage performance and ecological benefits are clear. Treated runoff from 40% of the 29-acre campus is now allowed to infiltrate or drain to the lake, a 28% increase from pre-SMP conditions. An estimated 6.1 million gallons of rainwater is being diverted from the Chicago's combined sewers annually.

Building on the success of the Lake Shore Campus stormwater strategy, Loyola and SmithGroup collaborated to address LUMC’s growing flood risk. Because the facility was a regional Level One Trauma Center, it was imperative to safeguard the hospital and ensure unimpaired access for ambulances, patients and staff regardless of future weather conditions.

The unprecedented flooding in 2013 revealed that LUMC’s vulnerability to flooding was part of a larger community issue. Through early stakeholder engagement with IDOT and Metropolitan Water Reclamation District of Greater Chicago (MWRD), we discovered that both agencies had identified addressing chronic flooding along the state highway that fronts LUMC as a top priority.

A partnership was forged with IDOT and MWRD, integrating parallel drainage studies for the medical center campus and the highway. In 2019 the agencies agreed that the highway relief sewer could accept pumped discharge from LUMC, creating a much-needed overflow outlet for the medical center campus. Without the early engagement and collective planning, the connection, literally, would not have been made. Loyola completed Phase 1 construction of a three-phase flood mitigation plan in 2018, with IDOT and MWRD set to bid the highway drainage project in 2020. 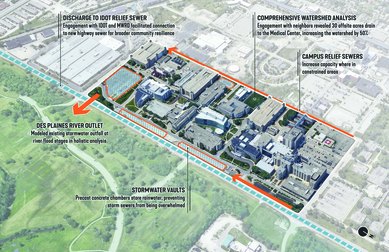 The benefits of working at this larger campus/urban scale start with the questions you are able to consider as part of the design process. How are the hydrology and the infrastructure interconnected upstream and downstream? What partnerships can help produce more impactful outcomes? What synergies can be found with other property owners and larger governmental initiatives? How can the final design enhance public access, use and appreciation? By scaling up our thinking and acting “Big Picture” from the outset, we can discover broader opportunities and realize more comprehensive and resilient solutions.