Over the last several months the combined impacts of the COVID-19 pandemic and long-standing structural racism have driven a conscious and existential awakening regarding race, public health, policy and perception.  Not since the foment of the Civil Rights movement in the 1960s has such a powerful clarion call been raised for racial justice. Many are asking how to best transform the grave challenges we face into a new consciousness that fosters equity in how we build and rebuild our cities.

It’s within this context that many in the design and developmen industry are grappling with their own unconscious biases in methods, strategies and outcomes.  While often seen as a result of existing policies and clients’ economic interests, development ultimately yields strategic and built outcomes that impact lives.  Now more than ever, we must assert greater awareness and intentionality around the social and racial impacts of our urban design and development work, while recognizing the failures of our past and our responsibility for a consciously inclusive future.

Dan Kinkead, SmithGroup's Co-Director of Urban Design,  recently had the opportunity to talk with Anika Goss-Foster, the Executive Director of Detroit Future City – a non-profit organization dedicated to improving quality of life for all Detroiters. The two spoke about her experiences working in community development for the majority of her career, and her perception of design and development in cities, especially her native Detroit.  What unfolded was a robust conversation that examined not only how we arrived at where we are today, but how design and development practices can – and must – be more directly driven toward an inclusive and equitable future. We share their conversation with you in a two-part series of posts.

Here is a link to  the first installment in this series.

DK: There are certainly a lot of challenges facing our nation at this moment: a critical health crisis, social distancing that’s keeping people away from loved ones and friends, and increased joblessness that is either directly or indirectly associated with COVID-19. The convergence of all of these changes is also creating opportunities to make improvements. But the complexities of racial equity are larger, more complex and more challenging.

Many in the design and development world want to understand how to become agents for positive change. For example, key organizations such the National Organization of Minority Architects (NOMA), American Institute of Architects (AIA), American Society of Landscape Architects (ASLA), and the American Planning Association (APA). How do you feel designers and planners can institute some of the advancements that you’ve started to outline? And what is the best vehicle to get there? Is it policy, education, institutional change? Or is it all of the above…and more?

AGF: The solution needs to be a combination of all of these things. The reason I say this is If we are under the assumption that we have created a structure that doesn’t allow an entire population to thrive, then every single aspect of that system structure needs to be reevaluated. It may be that some things are fine, but we know as fact that it is all problematic in some way, shape or form. Most of the systems that are in place today were designed during a time where it was incredibly important to keep races segregated and to give Black people what, at the time, people thought they deserved – which was less than whites at every level. So, if we know and believe this is an accurate representation of mindsets of the time, that means that every single thing created and put in place during this period in history also needs to be reconsidered. This would include design standards, and housing policies, and even financial structures and systems.

I don’t know how to get past things like this. But I do know that we are in that moment. We’re there now.

Not long ago I was at a community meeting for the West Riverfront. The attendees were primarily Latinos from southwest Detroit. As they described what they hoped to see built, they said they wanted the park to be designed so that it felt inviting to the community, but they also emphasized that it needed to be their park just as much as it was everybody else’s.

Visions like this are harder to achieve than most people think. When a young man from the city’s southwest side said he wanted to be seen from the riverfront that’s a big, bold dream that takes a lot to make it a reality. Ensuring that a major new public park is inclusive geographically, physically and aesthetically to low-income Latinx communities in Southwest Detroit is often out of alignment with the goal of creating a regional park that caters to the predominantly white, middle class region in southeast Michigan. What history has shown us is that creating public spaces for poor people of color in urban settings begins with “safety” and ends with fewer amenities with the smallest budget resources. What this young man described was to do the opposite of what is traditionally provided, culturally competent, aesthetically beautiful and resource rich to attract both people from across the region and from their neighborhood, intentionally. 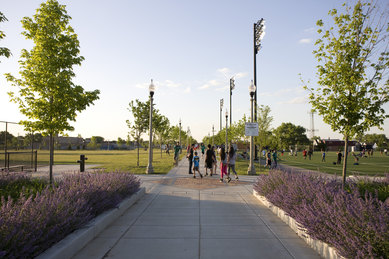 DK: If you think about things that you’ve learned over time, what are some key takeaways that you could impart to the design and development community?

AGF: I think the most important allied approach that the design community could take right now is to acknowledge and recognize the systemic history of racist design in the past. And I’ve seen this in so many different communities across the country. Not only are they segregated but the housing stock in that segregated part of the community is so poor that it can hardly be standing.

That’s something that we don’t often realize in Detroit in comparison to other cities, The historically black neighborhoods in other cities were extremely segregated and places where Blacks only live in this one neighborhood.  In these places the housing stock and commercial corridors and schools often look deplorable. Pittsburgh is just one example. If you go into historically Black neighborhoods in Pittsburgh – the place where August Wilson is from and born – they look terrible.

So, there has to be some recognition in that. Then, we have to want to design for beauty, creativity and inclusivity in places that have traditionally been isolated and financially oppressed by design. Think about the intentionality of that. And think about the impact you could make in communities like this, recognizing that nothing that these people are experiencing happened by accident. There were a lot of designers and planners before you that were comfortable and culpable implementing these systems and solutions.

DK: So we’ve discussed broadly how the design community might move forward from here. For you, the work that you do is already so directly dialed into this movement. How are you planning to move forward? What are your primary objectives?

AGF: (Laughs) So I’m over here getting kicked off with all kinds of committees and experiencing pushback and bringing up all kinds of stuff that nobody wants to talk about. Maybe we do a lot of stuff. Maybe we don’t do anything. (laughs again)

But one thing that I see as a positive is that Detroit actually has an opportunity to be organized to do this and do it right. In other cities like those in California this lift is so heavy. Not even middleclass white people can afford housing in California. It is out of control. The lift here is so much lighter than in other places. So, my goal is to use whatever public and private resources that we have at our disposal to create disruption at all levels – within housing, commercial sectors, community planning – and make change happen. We’re not going to get another time like this. We’re just not. So, we need to take advantage of it and lead with it. And that could look like a lot of different things – citizen planners, community councils, designers, designers of color.

We’re not creating enough job opportunities through these efforts either. So many sectors and industries are still woefully behind in this, including African Americans. Opening up the door to a city like Detroit can create great new opportunities. We have the potential to nurture and produce more great designers because there are so many avenues for opportunity here.

But this can’t just be my issue, right? In this moment of disruption this can’t be a one-way street. We all need to work together to make this right. It can’t just be an arrow leading from A to B. Our path forward needs to address so many other factors that we’ve touched on today -- seeing changes in the senior management levels of organizations, and changing the composition of Boards of Directors, and restructuring financial capital. For example, TCF Bank has made a $1 billion dollar commitment to the advancement of minority and women-owned businesses. But what do the terms look like? Can people afford the rates? Do we even have a pathway for minority and women-owned businesses to access that kind of capital? Are people asking these very important questions? As we build another system, is it still very small…because we are still in the mindset that certain people only deserve so much? If so, then what’s the point?

We need the kind of visionary community where there are all kinds of people living in one community cooperatively. So, you move into a neighborhood and no matter how your family or household changes you can still stay in that neighborhood.

DK: This is definitely going to take time, but more than ever there is also a real sense of urgency that we absolutely have to make this happen. We must be realizing progress and impact. Think of being a child today and seeing all of this taking place. For them to see things changing and for things to be better for them when they are adults – for me, this is very powerful.

AGF: I am actually very optimistic about the future of young people. We have raised children that are not only accepting of others equally, but we are also raising children as critical thinkers. As early as elementary school children are encouraged to question everything and make decisions based on their own moral compass. That is very different than the way most of us were raised. We were taught facts of how the world works without question or criticism. This idea of being open to differences, ways of life, and economic systems will require an entire generation of young people to all believe this way for this to become the norm and not the exception. In the interim, we continue to take advantage of the opportunity we have right now to disrupt the current racial construct that keeps millions of Americans behind. Honest conversations, such as this, is how we begin the process.

DK: I appreciate you sitting down with me today.

AGF: You are very welcome. I really appreciate the opportunity to talk about this subject with you.