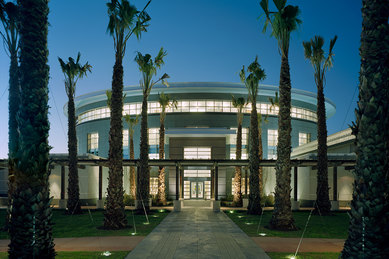 Designing a World-Class Rehabilitation Center for Our Wounded Warriors

The Center for the Intrepid (CFI), the world’s most advanced center for rehabilitation, research, education, and training, opened in 2007. Over the last ten years, the CFI has treated more than a thousand service members who have suffered severe amputations, burns and other wounds in battle. Since it came online, the facility and its incredible staff, patients and their families have contributed to many remarkable advancements in rehabilitation therapy, research, and recovery.

The Center for the Intrepid remains one of the most significant projects SmithGroup has had the honor to design. On the 10-year anniversary of its completion, we're taking a look back how this extraordinary project came into being.

At the time the Center for the Intrepid (CFI) was conceived, more than 23,000 troops had been wounded in Iraq and Afghanistan. Of those, more than 10,000 sustained injuries too severe to allow them to return to duty. That number has risen as the combat continues.

In 2005, to meet an urgent and growing need for the care and rehabilitation of the men and women who have sacrificed so much for our nation, an extraordinary team of physicians, researchers, philanthropists, architects, construction workers, and over 600,000 Americans together took on an extraordinary mission: to create, in record time, the world’s most technologically advanced physical rehabilitation facility to care for our wounded soldiers.

Just 18 months from its inception—less than half the time it would normally take to design and build a facility of this scope and complexity—The Center for the Intrepid, a world-class, state-of-the-art rehabilitation training and research facility, was dedicated on January 29, 2007.

This is the story of how the nearly impossible happened.