Detroit’s Belle Isle State Park is one of the most widely known and frequently visited destinations in southeast Michigan. An assortment of architectural treasures, cultural icons, recreational facilities, and natural features provide a range of experiences to attract visitors across 982-acres of parkland and its associated water systems.

This park’s popularity extends over a century, but it wasn’t until the last couple of decades that much attention or appreciation was given to the island’s unique ecosystems.

The island’s location, terrain, and underlying clay soils helped shape its globally rare wet-mesic flatwoods forest. Both upland and lowland native plant species are found growing side-by-side, as well as species not typically found this far north. Located on a major migratory flyway, birds can be observed in high diversity and abundance during spring and fall migration. From the heart of the flatwoods to the water’s edge, a variety of turtles, salamanders, and even the state-threatened Eastern Fox Snake can be found, along with mammals such as deer and beaver. Historically, many fish species made use of the nearshore habitat for both spawning and as a nursery for juveniles.

Unfortunately, urbanization and human influences have taken their toll. Fish habitat has diminished up and down the Detroit River since European settlement. Wetlands were filled, habitats were fragmented, and both land and water were polluted. In order to improve navigation for freighters, channels were excavated out of the riverbed. While this provided benefit to the shipping industry, the substitution of a smooth lined bottom for the natural nooks and crags in the limestone riverbed resulted in the loss of significant spawning habitat for the threatened lake sturgeon, walleye, and other species.

Due to 200 years of degradation, the Detroit River was designated as an Area of Concern (AOC) in 1987 per the Great Lakes Water Quality Agreement between the U.S. and Canada. Fortunately, as more information was learned about the island’s environmental benefits, partnerships were formed to restore and re-create natural systems that once defined the island. The Detroit River Public Advisory Council (PAC) is leading an effort to remove 11 Beneficial Use Impairments (BUIs) so that the river can be delisted as an AOC. The PAC developed a guidance plan to remove two of these BUIs: “Degradation of Fish and Wildlife Populations” and “Loss of Fish and Wildlife Habitat.” The plan identified Belle Isle as an important habitat restoration opportunity that could contribute toward removing these BUIs. 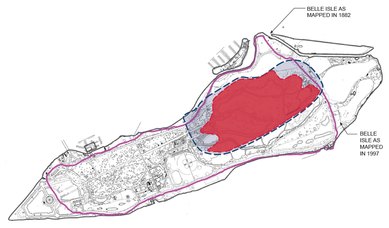 The guidance plan, which can be downloaded here, identifies five projects on the east end of the island, all of which are in various stages of completion. Project funding came from the Great Lakes Restoration Initiative administered by the U. S. Environmental Protection Agency and the National Oceanic and Atmospheric Administration.

SmithGroup provided ecological restoration design services over 15 years on five of six restoration projects, along with planning, engineering, and construction management for four of the projects that re-created nearshore fish habitat. Although each project’s goals and objectives were unique, they shared a focus of re-creating supportive habitat for the life stages of target fish species, notably lake sturgeon, walleye, lake whitefish, perch, pike, and muskellunge.

The first project kicked off in 2004 as a pilot effort to restore a spawning rock reef upstream of Belle Isle. The pilot reef was expanded and two more reefs were added upstream in 2016, for a combined four acres of spawning sites (habitat for fish life stage one) near Belle Isle. In 2017, post-restoration monitors found large numbers of sturgeon eggs at each rock reef, providing the first signs of the project’s success. 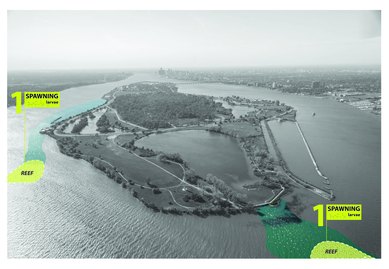 Habitat for fish life stage-two included creating 2.4-acres of nursery habitat for larval and juvenile fish at the South Fishing Pier and reconnecting the river to the 40-acre Blue Heron Lagoon. Nursery habitat is critical for protection and nourishment of drifting larvae and young-of-the-year lake sturgeon. Blue Heron Lagoon was constructed in the 1920s and 30s by adding excavated material from a growing downtown Detroit into the river to enclose the shallow waterbody. SmithGroup was contracted by the Friends of the Detroit River, fiduciary for the PAC, to lead the design effort to reconnect the lagoon to the river. Completed in 2013, the project features a 100-foot-wide opening to the lagoon spanned by a new pedestrian bridge. Additional habitat restoration included nearshore submergent and emergent native plantings, gravel spawning beds, and vernal pools. 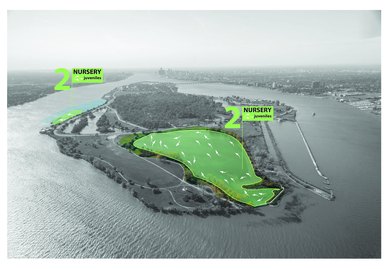 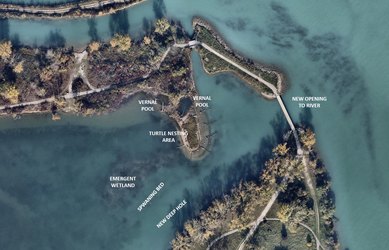 The last project in the series, Lake Okonoka Habitat Restoration, is under construction with completion anticipated in 2019. This project will complete the connection from the Detroit River through Blue Heron Lagoon, into and through Lake Okonoka, and back to the Detroit River, resulting in restored, nearshore fisheries reminiscent of pre-settlement times. In addition to adding 25-acres of nursery habitat, a natural flow will be created through the system, which is a critical component to successful fish habitat. Fish tend to swim upstream, so natural flow encourages juveniles to access greater foraging territory during the third stage of their life cycle. Natural current oxygenates both waterbodies and provides the final step in restoring a viable nearshore ecosystem. 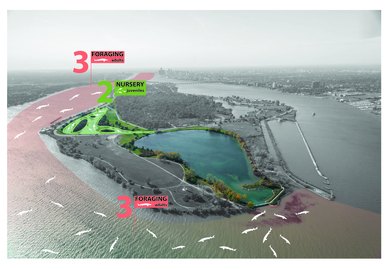 These restored connections also create a full recreational loop for canoes and kayaks. The new bridge at Lakeside Drive accommodates safe passage for both wildlife and small paddle craft at both low and ordinary high-water levels. Additionally, accessible portage platforms installed on both sides of a new stop-log structure where Nashua Canal meets Lake Okonoka provide a connection to the inner canals and lakes that continue to function as a perched system (hydraulically disconnected from the river). Completing the restoration project, a new wet meadow replaces a portion of Woodside Drive to reinstate overland drainage from the wet-mesic flatwoods forest to Lake Okonoka.

Belle Isle has long benefited the Great Lakes ecosystem and more recently provided recreational benefits to urban Detroiters. Restoration projects like these provide added benefits to the community and the economy. The PAC continues to advance the remaining habitat projects in the AOC. The goal is to receive approval to remove the habitat BUI’s by 2024.

As communities around the Great Lakes seek to restore viable habitat in the face of continued urbanization, the isle can serve as a model for how to remove BUIs in other AOC’s plus how to support natural systems within urban environments. A successful future means finding ways for nature to not only support people, but for people to support nature.

Realizing the Value of the Great Lakes Restoration Initiative

The health of the Great Lakes is an important driver of our regional economy. David Lantz reflects on how public investment in improved water quality and environmental health contributes directly to continued economic improvement and growth in the area. LEARN MORE