The Big Misunderstanding About Micro Units

There is an emerging trend in the U.S. housing market of tiny, studio apartments referred to as micro units. In the context of a growing market, I have witnessed local officials conflating the trend of tiny living spaces with affordable housing. Without doubt, the term “micro unit” can be difficult to define. The very definition of the micro unit varies from one city to another. But there is one thing that micro units clearly are not. Micro units are not synonymous with affordable housing.

In bringing micro units and affordable housing together in a discussion, we are mixing two terms that, taken individually, can be challenging to understand. How do these two intersect? They are not mutually exclusive, nor are they one in the same. A closer look at each sheds much-needed light on how and when these two concepts can be paired together.

If I were to say “Townhouses are affordable housing,” people would be quick to point out the ways in which this is not true. It is the same with micro units. Like a townhouse, a two-bedroom apartment, a duplex, or a single-family home, a micro unit is a descriptive title for a dwelling unit of a general size and shape. Location, market demand, and amenities drive the cost of all of these dwelling units.

A recent publication from the Urban Land Institute sheds some light on what defines a micro unit, and why this can be difficult to pin down. “No standard definition exists,” the study explains in its opening findings. The term is defined by the local market, generally referring to any dwelling unit complete with a fully functioning kitchen and bathroom that is 20-30% smaller than a conventional studio apartment in that market. This means that in Texas, a 500-square foot unit may be 20% below the average studio size, earning the descriptive title of ‘micro unit,’ while in East Coast cities a micro unit would be less than half that size, ranging from 200-300 square feet.

The assumption that ‘less square feet equals a smaller price tag on the unit’ frequently leads people to the incorrect notion that micro units are an innovative new form of affordable housing. However, there are several facts that debunk this line of thinking.

Affordable housing is primarily a social service provided through policy and funding, intended to help low-income individuals and families afford a place to live. We should really be referring to it as capital-A Affordable Housing, to distinguish from when the average, median-income home renter looks at a listing and thinks, “Hey, that’s affordable!” with a lowercase ‘a.’ Capital-A Affordable Housing is a government-delivered social service that originated during the Great Depression and has since evolved through federal regulations. It is loosely defined by the U.S. Department of Housing and Urban Development (HUD) as “housing for which occupants pay no more than 30% of his/her income for gross housing costs, including utilities.”

Put another way, HUD elaborates that “families who pay more than 30 percent of their income for housing are considered cost burdened and may have difficulty affording necessities such as food, clothing, transportation and medical care. An estimated 12 million renter and homeowner households now pay more than 50 percent of their annual incomes for housing. A family with one full-time worker earning the minimum wage cannot afford the local fair-market rent for a two-bedroom apartment anywhere in the United States.” 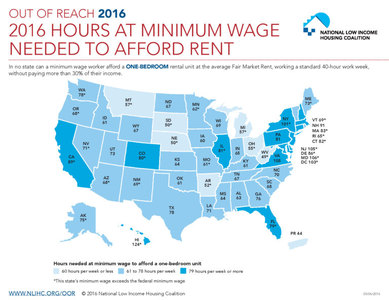 According to the latest Out of Reach report, an individual earning minimum wage cannot work a 40-hour week without paying more than 30% of their income for a one-bedroom unit anywhere in the U.S.  National Low Income Housing Coalition

Candidates for affordable housing can receive support through federal, state, or local government. Two common methods in which governing bodies provide affordable housing are through a rent supplement voucher system, or through inclusionary zoning.

The Housing Choice Voucher system—commonly known by its designation under the Housing Act of 1937, Section 8—allows recipients to apply a government stipend towards housing costs, offsetting the burden of the cost of housing. The vouchers can be applied to a rental or mortgage payment, allowing recipients to find and finance a housing type that best meets their needs. Ultimately, under the Housing Choice Voucher system, the stipend recipient chooses from market rate housing options and offsets the price with the rental supplement.

In contrast to vouchers, inclusionary zoning (IZ) is implemented through a zoning ordinance at the city or county level, and incentivizes developers to provide housing at affordable rates in exchange for development bonuses, typically additional density. This transfers the responsibility of providing for the needs of affordable housing from the government’s coffers to the developer’s pro forma. The New York Times describes the practice as such: “There are two appealing facts about inclusionary zoning: developers pay for it, so it has no direct fiscal cost at a time when direct subsidy dollars for affordable housing are scarce; and it produces economic integration, with high- and low-income households living on the same hallways.”

A micro unit can serve as affordable housing if the resident is using vouchers to cover a portion of the rent, or if it is rented below market rate per IZ guidelines. The key is that a low-income renter is able to live there—not that the micro unit itself is less costly to rent than other dwelling units on the market. Within IZ strategies of providing affordable units, candidates for the below-market-rate units must still complete a rigorous application to prove their income meets the requirements. But the fact remains that most market-rate micro units across the U.S. are rented at a cost that far exceeds 30% of the Annual Median Income (AMI), the marker by which affordable housing is measured.

Several key factors contribute to the higher price tag on micro units. The attraction of these units is their location in trendy downtown areas where real estate has higher value. A cache of shared amenities within the building also contributes to a higher cost per square foot; tenants are paying for less private space in their unit, but for more communal public space. Also not to be overlooked is the fact that as new construction, micro units are frequently developed to meet higher income market demands; high-end finishes and parking space minimums drive up the costs of construction, and require higher rents to make a profit. In some instances, micro units are marketed as an alternative to an extended stay hotel, or as a housing option for transient young professionals in need a housing solution for a limited stay of a year or two—providing everything down to linens and dishes.

In terms of average market performance, micro units are less lowercase-a affordable than their slightly larger, less trendy counterparts. If one looks at price tag alone, a micro unit might appear more cost effective than a larger studio or efficiency, but a deeper dive shows that at the cost-per-square-foot level, micro units are more expensive on average. According to the ULI report, these units are “leasing at approximately 20 percent to 30 percent lower monthly rent than conventional units, yet at very high value ratios (rent per square foot).”

Another critical failure of the micro unit’s ability to be affordable housing needs is its spatial definition. Often those most in need of affordable housing support are families. In this way, a single-room micro unit at less than 350 square feet has little to offer. The ULI study found that “The target market profile for micro units is predominantly young professional singles, typically under 30 years of age, with most under 27 years of age, trending slightly more male than female.” This target demographic is far from inclusive of the single parent households or families with dual minimum wage incomes who are often candidates for affordable housing.

From a developer’s standpoint, there is a lot to gain from the micro unit movement. With the smaller footprint of a micro unit, developers can provide more dwelling units on a single site than with a traditional unit, increasing their revenue. Under inclusionary zoning ordinances, where a percentage of new units are required to be leased at an affordable rate, this requires a higher number of affordable units, but it also creates more market rate units. These apartments, renting at a higher ratio than their conventionally-sized counterparts, are a lucrative deal for developers. The financial reward that micro units provide to developers, and their successful lease rates, bolster the development of more micro units.

As micro units become more ubiquitous, it is critical that architects and planners are informed about where they fall in the discussion of affordable housing. With this understanding we are better able to ensure that developers are not filling quotas with one-size-fits-all affordable housing in a format that does not fit all but benefits their bottom line by packing more units onto a site. By educating ourselves, our clients and our communities, we can create master plans and write policy that do not rely on a single housing format to provide for the affordable housing needs of the diverse populations of our cities. We will be better poised to adequately provide for the full range of economic needs in our communities.