From Pink Zone to Mix Tape

While the name has changed, Mix Tape is part of our ongoing effort with the City of Detroit and the Knight Foundation to advance innovative regulatory mechanisms to promote small-scale development projects and medium-density “missing middle” housing. Over the past year, our team has emphasized the vital role that the city’s corridors will play in securing the future of Detroit’s neighborhoods. We recently made this case in our final Mix Tape recommendations with the city as part of the DETROIT DESIGN 139 bi-annual exposition. Held at the SmithGroupJJR-renovated 1001 Woodward Avenue storefront, the exhibitions highlight the unique design thinking and partnerships that are reenergizing the city. 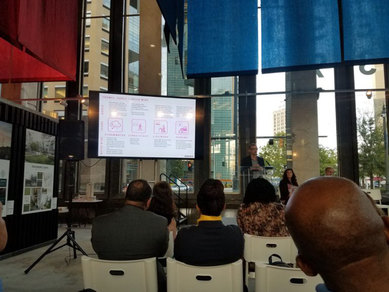 Originally branded as Pink Zoning Detroit, the planning effort initially set out to reduce the “red tape” of an overly bureaucratic development process, and to provide more expedited review and permitting. The thinking was that “Pink Zones” would enable the City of Detroit to redesign its regulatory policies along particular corridors, smoothing the path to improved commercial vitality through new uses that encourage diversity and innovation. 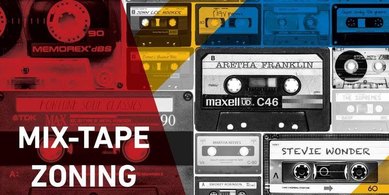 The term Mix Tape evokes a compilation of favorite pieces of music, typically by different artists, recorded onto a cassette tape or other medium by an individual curator. It’s an activity that has been central to this city of blues, jazz, Motown, and techno. Most importantly, Mix Tape recognizes that to achieve the city’s desired outcomes, the resulting regulatory mechanisms will not always be lean or reduced, but rather more process-oriented, focused, clarified, and sometimes even increased.

In the wake of decades that brought a shrinking economy and population loss, city regulations were unable to foster the full range of small businesses and housing options that sustain a diverse and vibrant community life. Detroit’s current zoning ordinance is mostly intact from its original 1940 version. 79% of the approximately 290 miles of commercially-zoned streets are designated B4; this means that new mixed-use development in these zones can only be approved with changes to the overall ordinance, a process that is lengthy and cumbersome.

To address these outdated regulations, Detroit is poised to tackle a rewrite of its zoning code. Unfortunately this too can be a lengthy process.  In the short-term, our Mix Tape team recommends the following, immediate modifications to B4 zones: 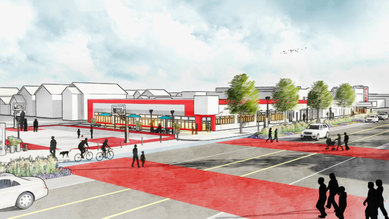 In addition, the city should pilot-test new policies within the identified “Pink Zones” located along prime commercial corridors in key Detroit neighborhoods. These pilots should include the following: 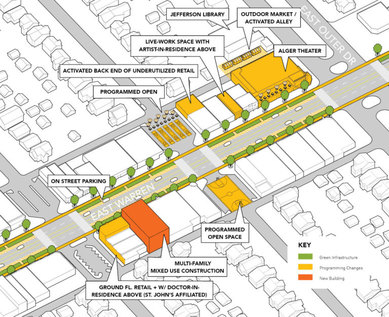 Copies of the full report will be published as part of Detroit 139 with support from Bedrock. In the meantime, we look forward to continuing our work with the City to envision and advance innovative policies and projects. As one recent article pointed out, the thinking behind Mix Tape is already influencing corridor redevelopment efforts.

While each city and region presents unique regulatory challenges and nuanced planning issues, the lessons learned from Mix Tape and its outcomes will certainly be applicable and achievable in other places. The future of our city is increasingly bright, as pointed out in the New York Times article that posed the question, “Is Detroit the most exciting city in America?” But the moment for thoughtful change in development practices is now. Initiatives like Mix Tape will help us make sure our policies and regulatory mechanisms support our aspirations.