Detroit’s ongoing recovery efforts have led to a wide range of unique and innovative planning and design responses. For the Why Detroit Matters blog series (parts one, two, and three), SmithGroupJJR’s David Lantz sat down with Urban Design Practice Director Dan Kinkead to discuss the chapter Dan wrote for the recently published book Why Detroit Matters: Decline, Renewal and Hope in a Divided City. Dan focuses on Detroit’s emerging and precedent-setting approaches to urban redevelopment and recovery, and their growing significance at a national and international level. 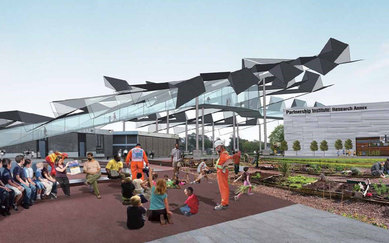 This post examines how Detroit’s colleges and universities are emerging as partners for redevelopment and revitalization efforts at the neighborhood level.

DL:  Lawrence Tech’s connection to a number of the initiatives you wrote about in the book is worth noting. LTU is a technical college that originated in the midst of the great depression in 1932, right next to where Henry Ford perfected the assembly line, and their mission was to help their students succeed in an era of massive dislocation and change. They’re essentially fulfilling that mission again today. How critical do you think Lawrence Tech and academic partners like them are for Detroit’s recovery?

DK: Detroit’s array of higher educational institutions are key. Particularly those that provide greater access to the critical skills operating workforces need today. I think in many ways Lawrence Tech delivers this, along with many other universities in and around Detroit, whether that’s University of Detroit, University of Michigan, Wayne State University, or Michigan State.

Each of them has some program or dimension of influence and engagement in the city. Each of them is working with communities and in some cases with companies, and they’re working in place, in neighborhoods. Not just for internships, but for impact. For example, there’s the Civic Commons initiative with the City, Marygrove College and University of Detroit Mercy, as well as a host of other partners in the Fitzgerald neighborhood. It’s pretty powerful to see and I think we’re going to see more and more of it.

In the case of LTU, there’s the fascinating entrepreneurial work that Constance Bodurow has led with Detroit Public Schools Sampson-Webber Academy. It’s really amazing to see how she’s worked hand in hand with the larger community and the school itself, not only yielding these programs that provide the ability to grow fresh fruit on site and that deploy renewable energy systems, but to actually integrate that process into the classroom so that the kids are actually part of it. The students are contributing to the direction of it and learning.

I actually participated in one of their events where they brought in their graduate students who were developing some of the larger renewable energy strategies for the school. They had a pin-up and presentation in the school library where students, parents and others could come in, mix around and ask questions, and it brought a lot of these worlds that seem so far apart much, much closer together. It may stimulate in many of these kids a way of thinking that previously seemed out of reach.

DK: Absolutely. We’re also seeing higher ed. institutions stepping up to partner with Detroit schools that were slated for closing by the state. The state was planning to close 24 schools in Detroit where students have been struggling academically. One of these schools was Sampson Academy. But thanks to strong community opposition and a philosophy of academic recovery and partnership, the school district will be working with Eastern Michigan, Michigan, Michigan State and Wayne State over the next three years to help improve student achievement at these neighborhood schools.

The role that public K-12 schools play in Detroit’s recovery is vital, so the support of higher ed. institutions to preserve that investment in our city’s future is essential.