Detroit’s ongoing recovery efforts have led to a wide range of unique and innovative planning and design responses. For the Why Detroit Matters blog series (parts one, two, three and four), SmithGroup’s David Lantz sat down with Urban Design Practice Director Dan Kinkead to discuss the chapter Dan wrote for the recently published book Why Detroit Matters: Decline, Renewal and Hope in a Divided City. Dan focuses on Detroit’s emerging and precedent-setting approaches to urban redevelopment and recovery, and their growing significance at a national and international level. 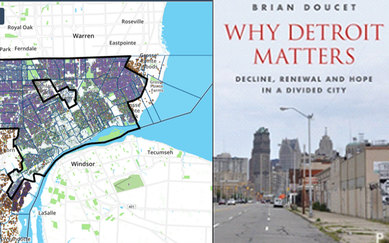 This post looks at the pivotal role that Detroit’s new open-source data infrastructure is playing in city rebuilding and recovery efforts.

DL: Let’s talk about Detroit’s information infrastructure. What your editor described as “informatics.” You wrote that the financial crisis in Detroit essentially shut down the traditional availability of information and data. In response you’ve seen some unique private and nonprofit data resources pop up. Tell me more about these data providers and what they’ve done for the city.

DK: Many cities have struggled with key infrastructure around information and information access and digitization, and that was certainly the case in Detroit. What emerged through early partnerships between the City and the Obama administration were tools and support systems to help the City create the new information infrastructure that it needed.

We’ve seen this evolve in a few ways. One is certainly within the City through folks like the Chief Information Officer Beth Niblock, who, by the way, became recognized in Detroit because of her involvement in a White House-led round table that occurred here. In that round table five or six other CIOs from across the country described the most powerful techniques they had used to build up information systems in their cities: everything from permitting to program access to online databases and so forth.

Beth became known here through that process. Our mayor subsequently hired her to be our CIO, and to lead many of the main objectives that were part of the original White House sessions. This demonstrates one of the key roles the Obama administration played in Detroit’s recovery, and the ability for our city administration to see new dimensions of opportunity within the talent that was available.

Since then, by the way, she’s established a whole Detroit.gov open data online resource that we had not seen before, and there’s been a big transformation.

At the same time, and actually preceding that a little bit, we did see two groups emerge that helped fill the vacuum we had for information access here locally, and have also become national leaders in this work. One is Data Driven Detroit, commonly referred to as D3, started by Kurt Metzger and which has been a core part of the information access system in Detroit for decades.

These guys anchored a lot of the key mapping and data digitization that many of us have used to help inform the city’s recovery. They’ve been tied into the larger blight removal program, too. Within that same program, Loveland Technologies emerged as a private enterprise that has been a key contributor to local mapping resources. Loveland’s work has really revolutionized how people get access to this data online. They’re providing more open data to more people by democratizing it and just making it readily available.

Loveland’s flagship platform for this is Why Don’t We Own This? This really shifted the power dynamics in local real estate and property ownership by making it visible, helping people understand what was happening and how it was happening. From that they’ve grown their business to not only provide data resources to Detroit, but now across the United States and in fact globally. So we see this innovative start-up come out of Detroit and do really amazing things, and then export those approaches and ideas. I think it’s emblematic of what is possible here. Detroit is leveraging the challenges we’ve faced—and our response to those challenges—to create whole new systems and industries, which can then translate to other places that can benefit from them.

DL: Related to the idea of leveraging vacant land that we were discussing earlier, you wrote about Detroit Future City’s Field Guide to Working with Lots, and the lot improvement grant program. This initiative provided design guidelines for people and money to help turn vacant lots into something positive for their neighborhoods. Tell me about that program and how it evolved.

DK: Similar to the way that we talk about Loveland and D3 democratizing access to information, the Field Guide to Working with Lots was also a tool intended to give all Detroiters access to the information that they would need to help improve their communities.

We know that there’s a tremendous amount of individual vacant lots in the city, and very few of these are aggregated. They’re often lots that have been acquired with adjacent neighbors through side-lot disposition, and in many areas Detroiters simply want to do something to help stabilize the area, to improve it, beautify it, or help it perform better from a stormwater perspective.

The Field Guide’s development was led by DFC’s Erin Kelly over about six months as a workbook with a supplement of roughly 36 different lot treatments that could meet the needs and desires of residents, and that could be readily deployed in place. It also included a list of preferred Detroit-based contractors to assist, if needed.

To help catalyze this, Detroit Future City received critical support from the Erb Family Foundation, Knight Foundation, and the Kresge Foundation. They supported a pilot program that led to the implementation of lot treatments in and around the city. The first round of project went through in 2016, and I believe they have another round going now.

This program is not just about an investment into one lot adjacent to one house in a neighborhood, but instead about a larger granular buildup leading to a transformation across a number of city neighborhoods, and you really see this coming through. The City’s planning department, where Erin Kelly now works, is advocating for this through their current planning initiatives, including one that’s tied to a community in the northwest part of the city called Fitzgerald. Under the leadership of Maurice Cox, the Planning Director, there’s a commitment to these kinds of improvements in the neighborhood that we’ve not seen in the past. At the same time we’re seeing continued interest from a range of nonprofits across the city to help administer this and push it forward, so it’s pretty inspiring to see this really take hold.