What is Driving Students' Desire to Return to Campus?

As the COVID-19 pandemic continues, so does uncertainty about how colleges and universities will be operating in the fall. In the last few weeks, Michigan State University and the University of North Carolina at Chapel Hill have reversed course and sent students home from campus. These perpetually changing conditions make it challenging for students and their families to plan a safe and appropriate return to campus. Many surveys have been released showing that most students want to return to campus. For example, a survey by Axios/College Reaction showed 76% of students planned to return to campus in the fall if given the option.

As higher education designers and parents of college students ourselves, we feel the data only tells part of the story and there is a lack of understanding of the difficult decisions behind these numbers. We were curious about the emotional drivers underlying student choices for fall 2020. We interviewed a small sample of students that represent each institution type from open access to research universities to regional comprehensives and private liberal arts. While our survey methods are not scientific, we were able to identify several interesting themes.

According to our interviews, most students wanted to return to campus to assert their personal independence, partake in the “college experience,” find or re-engage with their communities, and not “miss out.” In many cases, students crave this community and freedom so much that they are returning to off-campus housing to live with friends, even when all courses are online. Additionally, students didn’t see many realistic or appealing alternatives. A lack of quality jobs, few “gap year” opportunities, and unsuccessful experiences with isolated, online learning last semester led them to see on-campus learning as the only true option.

The desire to find and recreate community was common to all students, but priorities were different for first year and returning students. While returning students see reconnecting with their network as important for their learning, the first-year students were more focused on the social aspects of campus and making friends. First-year students often had the opportunity to virtually meet some of their classmates through social media and videocalls before arriving on campus and were eager to solidify those relationships in person, even though interactions would be restricted to suitemates or a prescribed cohort.

Despite their positivity about returning to campus, most of the students interviewed agreed that the decision meant they were likely to contract the virus. However, they were willing to take the risk to have some semblance of a college experience. When considering what getting COVID-19 might mean, their age and lack of risk factors made them confident they wouldn’t face major complications. Many had known friends who contracted the virus but only experienced mild symptoms, and recovery was swift, typically within three to five days. Many students consider living with peers a win-win situation. They believed they would be surrounded by young people, whom they considered less susceptible to the virus, and they would be less likely to infect older family members.

In addition to building social connections, many students had practical reasons for wanting to return to campus. Some students need access to campus Wi-Fi to help them learn online while others, especially those living with multiple housemates or family members, were looking for quiet, private spaces where they could concentrate. In the case of one student, whose campus has not yet determined the availability of “hands-on learning” essential to completing his apprenticeship, the lack of access to experiential learning led him to defer for the year.

Online learning appears to highlight differences in the way students learn and their circumstances outside of school. Each student’s online learning experience in the spring semester was an important factor in their decisions about the fall. Many students expressed frustration with online learning, finding it was challenging to stay focused and felt it lacked the structure and community they needed to feel engaged and make the work meaningful for them. According to a student attending George Washington University, “For me, nothing replaces being face-to-face to understand the nuances of what the professor is saying. Facial expressions and body language are key.”

In comparison, other students, notably those who voluntarily chose virtual learning options prior to the pandemic, found online learning more palatable and sometimes preferable to in-person classes. A student at Santa Monica College appreciated online courses because she was able to better focus on coursework. She said, “I can do schoolwork on my own time, I can schedule my homework. And I can do other things, like my job.” Online learning was also praised by students who needed additional schedule flexibility for jobs or family responsibilities. 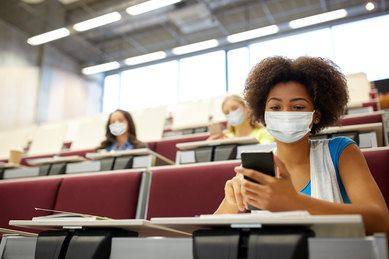 As the fall semester begins at campuses across the country, we are eager to find out whether these students’ expectations were met and whether their needs for independence, community, and engaged learning experiences were satisfied. As we write at the beginning of September, many campuses are already reeling from positive cases and reduced access to in-person classes, dining halls, libraries and recreational facilities. Many students who have already returned to campus are now learning online from their residence halls and apartments. Over the next few weeks many more students will be returning to campus. We will interview our students again and look forward to hearing more as their futures unfold.