While Northwestern University enjoys a prime spot along Lake Michigan in Evanston, Illinois, just north of Chicago, its location has also posed challenges to its growth. Needing to make the most of their landlocked urban campus, the University sited their proposed Ryan Fieldhouse and Walter Athletics Center on coastal land extending onto a sandy beach. Because the design process started just after a long period of historic low water levels, the state-of-the-art building was sited much closer to the lake’s ordinary high-water mark than it might have been otherwise. But while the design process advanced, so did Lake Michigan’s water level.

With the architectural design already largely completed, SmithGroup’s coastal engineers were asked to perform a rigorous review of the waterfront site and potential future wave conditions. We determined that if left unprotected, the building would be subject to large wave forces and foundation erosion as lake levels returned to their previous high-water mark. The unique, customized solution was a reflecting wave wall integrated into and wrapped around the lakeside of the athletics center.

To inform the design we carefully analyzed lake conditions at various water levels using offshore and nearshore numerical models. Wave climate, longshore currents, and cross-shore stability were modeled to gain an understanding of the dynamic nature of the beach, recognizing that sand is a highly erodible subsurface. Based on the modeling data, we looked at beach run-up and residual forces against the walls of the planned building and determined the structure could not withstand these wave forces without protection. A wave wall was planned along the edge of the property boundary, helping to maximize the footprint of the already-designed athletic center. A 90-degree return was incorporated into the wall’s design to limit water overtopping as well as aerated spray against the building. The wall’s return arc redirects wave energy back toward the lake and safely protects the building behind it.

To verify design performance, scaled physical model tests were performed in Texas A&M’s Haynes Coastal Engineering Laboratory. Three channels were constructed in a parallel series to mimic a wave flume layout. This allowed multiple design options to be tested concurrently, expediting the evaluation of a myriad of layouts, elevations, and return angles. Using the test case of a 100-year/1%-annual storm-wave event coupled with historic high-water levels as the worse-case scenario, our engineers were able to optimize the wall’s dimensions and ensure that overtopping and wave forces remained within required limits.

To complement the aesthetics of the building, the engineers designed a curvilinear wall that blends into its surroundings while also expressing itself as an architectural feature. Each wall section was individually precast to create a smooth, curving design that mimics the shape of a crashing wave. The precast approach also facilitated a more efficient and cost-effective construction process along the beach bordering the building. 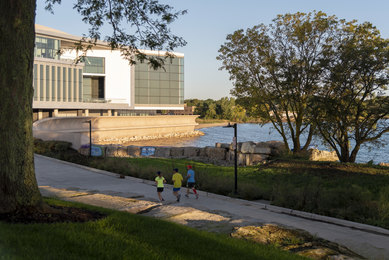 Shortly following the installation of the wave wall in spring of 2017, it was immediately put to the test with higher summer water levels and above-average storm events. The waves crashing against the wall validated its need as well as its performance. The university has been extremely pleased with the look and functionality of this innovative design, and the protection it provides its $270-million lakeshore athletics center. It also garnered 2019 design awards from the National Precast Concrete Association and the Society for College and University Planning for its unique and successful approach to coastal protection and resilience.