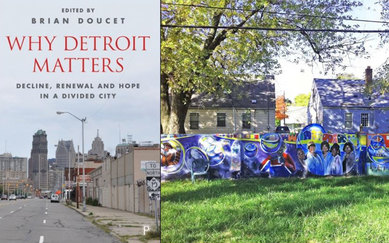 Detroit’s ongoing recovery efforts have led to a wide range of unique and innovative planning and design responses. For the Why Detroit Matters blog series (parts one, two, three, four and five), SmithGroupJJR’s David Lantz sat down with Urban Design Practice Director Dan Kinkead to discuss the chapter Dan wrote for the recently published book Why Detroit Matters: Decline, Renewal and Hope in a Divided City. Dan focuses on Detroit’s emerging and precedent-setting approaches to urban redevelopment and recovery, and their growing significance at a national and international level.

The final post in the series considers Detroit’s aspirational move away from its divisive past towards a more inclusive, equitable future.

DL: Perhaps it depends on the location and the context, but do you see Detroit’s adaptation of vacant lots as a transitional kind of land use strategy? Will some of these lots revert to private ownership and be developed at some point in the future, or will these treatments become more of a permanent part of the neighborhood fabric?

DK: In some cases these properties will likely be redeveloped, but this will take place over a longer period of time. There’s a great distance to be covered in Detroit’s real estate market where that kind of development would make sense. Where it does, I think many of us who are advocating for a sustainable, equitable and inclusive future for the city would want to see more multi-family housing: the “missing middle” housing that begins to engender a higher degree of residential density and opportunity that we’ve not seen in Detroit in the past.

We will see this in some areas, but by and large a lot of the vacant land portfolio that we see today will remain that way, at least during my lifetime, and can either be seen as a huge liability or an incredible asset. I think more and more people are understanding this to be a differentiating asset allowing Detroit to do things other cities can’t.

We have opportunities here to create an open space network across the entire city that can provide new spaces for recreation, for food production, for energy generation, enhanced mobility – there’s a lot that can be done here and I think we’ve just begun to consider those options. The ability for Detroit to incorporate this emerging open space network into its future form will be essential to its long-term success.

DL:  You write about Detroit’s “crucible of race and recovery,” and how that challenging and troubling history is giving way to new shared strategies and actions. There’s a better understanding of what needs to be addressed in terms of more socially and racially equitable development. Do you feel there’s a significantly different conversation happening now than in the past?

DK:  I do. I think at a basic level there’s a broader recognition of these inequities. I also think we’re seeing – now as Detroit recovers – there are many people who are participating in the recovery from a wide array of backgrounds. This includes people who have been in the city for generations, people who are new, people who are black and white, people who are from different countries and cultures. I think the accessibility of Detroit’s real estate market is providing opportunity for more people than we would see typically.

Detroit provides a degree of accessibility and influence that many people are taking by the horns. It’s part of an implicit but undeniable entrepreneurial spirit in the city. Many from Detroit will tell you we’ve done for ourselves when others couldn’t – or wouldn’t – do it for us. There is certainly truth to that: this city has gone through some remarkable challenges and many Detroiters have found their own way through that forest. As we emerge, we’re also fortunate to have a City government, led by Mayor Mike Duggan, prepared to advance real impact and benefit for all.

Because of that people are emerging now at a new moment with real optimism about where things could go. But there’s also a consciousness about not repeating some of the mistakes of the past; that we know better and we can do this better. We can create a more equitable, sustainable foundation for the city’s continued redevelopment. For many of us here, this is exciting and imperative.